Back to Home
Home --> web-dev --> Introduction to Test Driven Development

By Alicia Sykes, on Sunday 20th September 2015. Categorised in web-dev.

First off, what do tests provide us with?

Although all the above are true, using tests like this is just a tool - not a process.

In it's simplest form TDD comes down to the following process:
It's important to note that you must not write the code, until you've written the test.
Also it is essential to ensure the test actually fails first, it is surprisingly easy to make a small mistake in your test case that means your test will always pass, and that's not the type of error that anyone likely to look into. It's also sometimes necessary to back-test, where you break the code to show that the test fails.
This should be done for every couple of lines of code, every method. 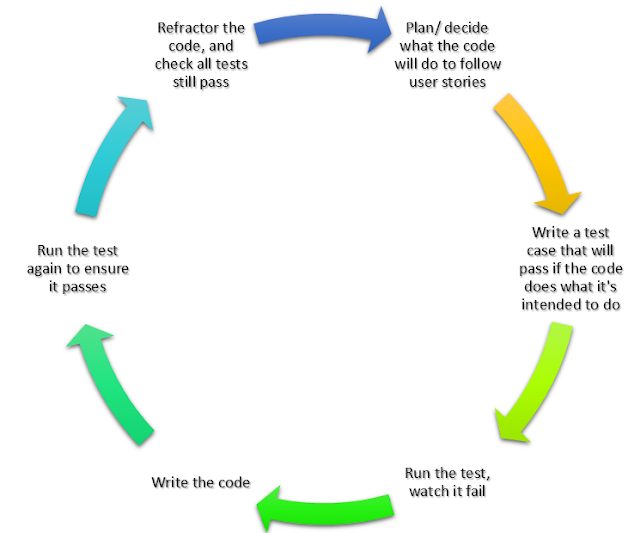 What does TDD provide?

Testable code, is good code!
This is because if you have long methods/ functions with loads of if statements and stuff, it's just not possible to write tests. If you write the tests first, you can't write the code that is too complicated.

Basically good testable code will have a much lower cyclomatic complexity. This is the measure of how many different paths there are through the code, so essentially every conditional statement you add, will give you another route and another set of tests.
If your finding the test complicated to write, then that's a code smell, your going about it the wrong way.

Better code in less time *
*so it might not feel like it's going faster, because it's a process rather than just hacking. And processes feel tedious. Also it may take some practice to get up to speed, but it's fully worth it in the long run for speed and code quality.

Use your judgement about when to test

Although nearly all code should be tested thoroughly there are some exceptions:

Links for learning more about TDD